Lessons Learned in an Informal Setting

When you think of teaching about data analysis and data science, what might come to mind is a group of high school or college students working on statistical analysis problems. However, at the New York Hall of Science (NYSCI), teaching data science looks very different: 5 to 8-year-olds and their caregivers exploring the museum through the lens of exhibit designers, asking questions, and collecting, analyzing, organizing, and interpreting data.

Data science and statistical reasoning are now considered essential at the middle, high school, and college level, so much so that the Next Generation Science Standards explicitly list “analyzing and interpreting data” as one of the Science and Engineering Practices (NGSS Lead States, 2013). Historically, research on students’ understanding of data science concepts has focused mainly on children in middle school and above (Makar, 2016). In recent years, this research has expanded to investigate young children’s understanding of data science and data modeling (English, 2012). However, this research is limited in that it is mainly focused on determining how young children could be introduced to data science concepts in schools and classrooms, and the educational strategies that have been developed to date have taken place mainly informal settings.

In a departure from these traditional settings and investigations, NYSCI is employing an ambitious new approach in an initiative entitled, Big Data for Little Kids: Data Modeling with Young Learners and their Families, supported by the National Science Foundation (DRL1614663). We have created a data modeling program and curriculum for children ages 5 to 8 and their caregivers at the museum and studied its impact on children’s learning and family interactions. The concepts we focused on are derived from previous research on data modeling with elementary grade students (Lehrer and Schauble, 2002; Lehrer, Kim, and Schauble, 2007). These studies examined how young children engage with key ideas in data science, such as, 1: You can define your data, 2: You can choose how to represent your data, and 3: You can find answers to your questions by looking at the data.

Centered on these modeling concepts, the research questions driving the project are:

Digging Into the Research Methods

Wrestling with such an enormous undertaking, we were faced with two immediate challenges, 1: How do we integrate data modeling concepts into a museum workshop program? and 2: How do we capture relevant evidence to address our research questions?

In terms of the workshop program, the key ingredient to integrating data modeling concepts was leveraging NYSCI’s Design, Make, Play approach. We encouraged families to engage in co-learning experiences by using the museum setting as an invigorating backbone for data exploration and conversation. For more details on how we worked through this challenge, see this blog posting.

Once we figured out the workshop program, we focused on the latter challenge, developing methods for observing how families learned together in the workshop. We began by exploring the relevant literature to understand how other researchers had captured children’s engagement with data modeling and families’ approaches to learning. We decided to adapt observation protocols from previous research that had been used to assess parent-child interactions, children’s learning in formal settings, and qualities of classroom settings, 1: the Mother-Child Interaction protocol (MCI), 2: the Child Observation Record (COR), and 3: the Classroom Assessment Scoring System (CLASS).

Then came the real test: using the protocols during the actual workshops. Researchers recorded observations using these protocols live during the workshop, and we also recorded audio and video of each family for further analysis. We quickly learned that attempting to use three different observation protocols in an active-inquiry-based workshop program was an impossible task for a number of reasons. First, we found it challenging for two researchers to be able to observe all of the families participating in the workshop. Second, one of the protocols was developed for younger children and didn’t work as well with 5 to 8-year-olds in our informal setting. Lastly, when it came to observing the whole classroom, it became clear to us that the informal museum workshop setting did not fit the same mold as the formal classroom criteria the protocols were built to assess.

Keeping all of these things in mind, we restructured our data collection methods for the second iteration of the program. We discontinued use of two of the protocols (COR and CLASS), revised the protocol focused on how families interact (Parent-Child Interaction), and rather than attempting to do the observations live during the workshops, we decided to code using the recorded video data after the workshops.

During the actual workshops, we focused on having each researcher follow a single family unit to create more of a case-study analysis. We also placed a greater emphasis on talking to the families after each day of the workshop to gather more information about their reflections on the data concepts and activities they worked on that day, as well as feedback on the programmatic elements.

Finally, we developed coding schemes to analyze the conversations between children and their caregivers using the audio and video recordings of the workshop. The data collection methods used in the second iteration proved to be a much more manageable endeavor, and allowed researchers to be more actively involved in talking with families throughout the workshop.

Reflecting on Our Research Process

So what have we learned from all of this?

We hope that our Big Data for Little Kids journey can help illuminate the successes and challenges of conducting research in an informal museum setting. Currently, we are still in the process of analyzing our preliminary findings. Stay tuned for more about what we find out! 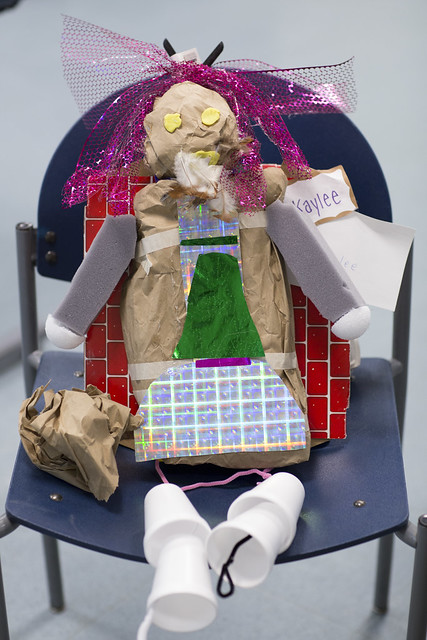 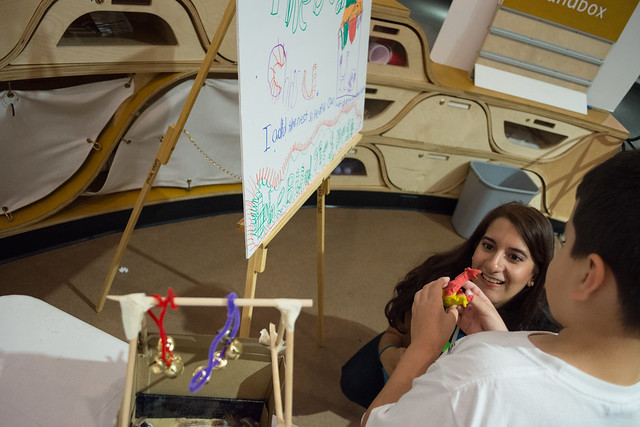 Big Data for Little Kids
Max and his mom are just one example of how museums can help families work together to investigate a complex topic in an extensive and meaningful way.

Big Data for Little Kids
Last month, a dozen young children showed off their museum exhibits to NYSCI visitors.
Back to top
Waitlist for Professional Development Workshops
Subscribe to Press
Subscribe to STEM Events News
We use cookies to ensure that we give you the best experience on our website. If you continue to use this site we will assume that you are happy with it. OkPrivacy policy