Object of game is to attract different “fish” to the variety of light combinations that you can create when learning how to build a simple circuit.

Learn reasoning by attracting marine animals to lights turned on by creating a simple circuit.

Middle school kids and up.

Understanding of electrical symbology and diagrams

Reasoning – around what light combinations will lure what kind of aquatic animal.

Use a combinations of components to light one or many different color LEDs.

Up to 4 Players on a multi-touch screen tabletop, connect the electrical components in a circuit to light the LEDs. Single player activities with opportunities for cooperative play and social interaction while players are at the tabletop screen. 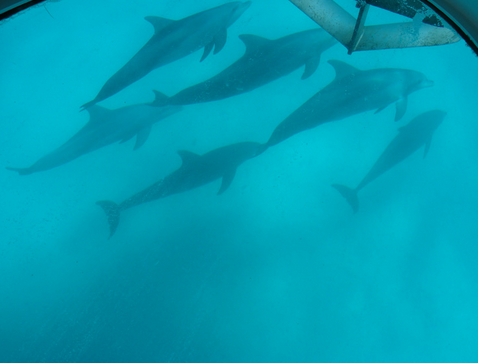 A cavern with an underground lake was discovered in Central America. The lake is filled with exotic never before seen marine animals. Biologists are cataloging these new aquatic species and are filming them using a submersible camera in the lake. The biologists discovered that these marine animals are attracted to red, blue and green lights in a variety of combinations. From a remote location you will help lure the creatures to the camera (to be filmed) by creating a combination of colored lights on a tabletop screen. The screen is the view from the camera looking down into the lake. Electrical components are on the tabletop for you to create the colored lights and lure these exotic marine animals to the cameraexample of view from camera and tabletop screen.

Announcement from NYSCI on Reopening

NYSCI Will Re-Open Its Doors to the Public When Visitor and Staff Safety Can Be Ensured Rethinking STEM education in a world shaped by COVID-19, NYSCI will continue to deliver virtual experiences and outdoor activities …

At-Home Activities for Kids
The New York Hall of Science has a wide variety of free, digital resources that parents can use at home with their kids to help supplement the science and math they are learning in school.

Cat Meets Sharks
Grouphug, a solar company that makes creatively designed solar panels for use by consumers and companies, will be appearing on ABC’s Shark Tank on Friday, March 20.
Back to top
Waitlist for Professional Development Workshops
Subscribe to Press
Subscribe to STEM Events News